In celebration of the theatrical release of Star Wars Episode IX: The Rise of Skywalker, a new CAVE2™ video:

The terrain was also reused from my Halloween CAVE2 picture (based on The Rise of Skywalker teaser trailer). That terrain is based on NASA topography scans of Wadi Rum, Jordan where Rise of Skywalker and Rogue One were filmed. Zooming around Google Earth, this seemed to be the specific location the Rey + Kylo Ren fighter scene was filmed. 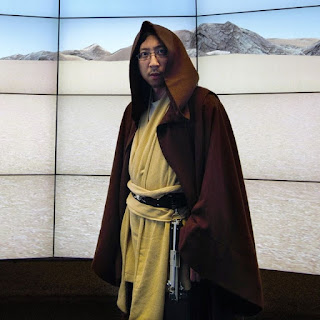 Jedi robe, cloak, belt, and lightsaber from my trip to Star Wars: Galaxy's Edge in Orlando on my way back from presenting a paper at SUI 2019 in New Orleans.

For the Halloween photoshoot the terrain, Star Destroyer, and TIE Fighters were placed in the Unity3D scene. However, other than the dust particle effect and the camera projection the scene was otherwise static. Any of the animations and interactions would be added in December.

Some of the new elements specifically built for this video was the Imperial Lambda Shuttle. Which I has started a while back, but didn't finish. I completed enough of the exterior and a bit of the interior and boarding ramp for use in this scene.

Other additions to the Millennium Falcon 3D model since my last post. The backlog is due to writing and presenting my PhD preliminary examination on December 2, 2019 followed by scrambling to work on a CAVE2 image for the 40th anniversary of Star Trek: The Motion Picture and finally The Rise of Skywalker theatrical release on December 19, 2019.