Uploading a backlog of progress from the last year. 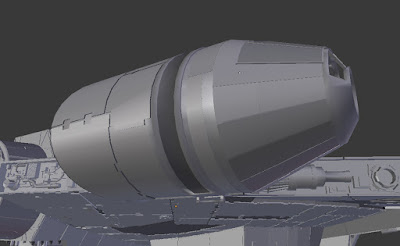 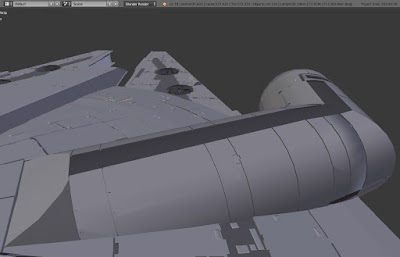 The edge equipment panels that surround the middle section of the Millennium Falcon was modeled based on a number of resources. Most of the equipment panels on the front-starboard side are based on screencaps or production photographs of the actual physical Millennium Falcon exterior set as seen in The Empire Strikes Back and The Force Awakens. Some were based on photos of the studio model from one of the museum tours.

The remaining panels were designed based on existing 3D models of the Millennium Falcon from various games such as Star Wars Galaxies: Jump to Lightspeed and Battlefront (2015).

Some panels like the one pictured below is actually derived from a production screenshot of the VCX-100 model (i.e. The Ghost from Star Wars: Rebels) used in Rogue One. This segment will eventually be used for my 3D model of the Ghost, but modified versions of the mesh was used to fill out the sections of the Millennium Falcon where I didn't have good reference material - mainly on the port side of the ship.

Posted by Arthur Nishimoto at 2:39 PM No comments: