I teased that the next update would be a CAVE2 one. But given a busy semester, slow progress until I remembered May the 4th, 2018 was coming up. I released a short teaser trailer to highlight the project features to date - well most of them. I spent about 9 hours the night before setting up the 12 or so shots used for the video. Every shot I filmed that night was included in the video. I had 3 additional shots planned, but didn't get around to filming those.

A number of the shots were modeled after the teaser trailer for 'Solo: A Star Wars Story' and uses the music from that trailer by L'Orchestra Cinématique which is available on their YouTube channel.


Like almost all of my CAVE2 images or videos, I personally setup all the shots, the camera, and the lighting. I used a few versions of the CAVE2 application for the video. Some were existing demo versions with the music muted, others I was modifying the source project and making a new build for specific behaviors I wanted to capture or setting up the in-game camera at a specific location in case I needed to duplicate a shot.

The final hyperspace shot was the one that took the most takes because 1) the lighting was hard to get right and 2) I broke the app once and the star streaks were stuck in front of the cockpit. It was also the last shot of the night, so I was rather tired at that point.

I was a bit disappointed I didn't keep the scene used for the video in part 5.5 of this blog since I actually used the CAVE2 displays behind the camera to illuminate myself. There's also a fun part of that story where about a third of the displays and tracking cameras were down since we were replacing some of the screens at the time.

Although I do still have the scene file for the Star Wars 40th picture I did in 2017. 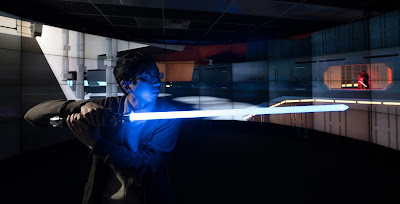 Since my last post, I've completed a first attempt at the flight stick controls for the Millennium Falcon as seen in all the films except Star Wars (A New Hope).

Based on several sources online, the flight yokes were originally from 1940s Vickers Viscount airliners and mounted backwards to serve as the Millennium Falcon's flight stick - though Solo might be the first time on screen that these flight sticks will be seen actually used in flying the Millennium Falcon opposed to just being held. The Solo teaser also showed the silver handbrake(?) lever on the center console being used - another first I believe. The Force Awakens made more use of the black throttle(?) controls on the top of the console.

Continuing to fill out the exterior details, I've modeled and animated the landing gear doors. The original three main landing gears use a similar two door approach. The two front landing gears added for Empire Strikes Back have a wider door that folds when deployed. This is based on some of the closeup shots in Echo Base.

One of the cancelled shots for the May the 4th video would have had a shot of the Millennium Falcon coming in for a landing with the fully animated doors and gears as it made its approach. Maybe for the best since I haven't modeling the cargo lift yet and the gaping hole visible in the above image.
Posted by Arthur Nishimoto at 9:41 PM